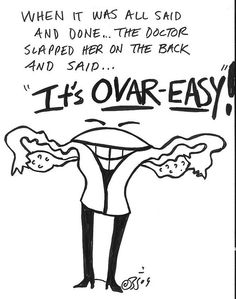 Image Courtesy Pintrest.com What is a hysterectomy? — Surgcical removal of he uterus is the part of a woman’s body that carries a baby if she is pregnant. Another word for uterus is “womb.” If you have a hysterectomy, you will never be able to carry a pregnancy.

Procedures: There are 4 main kinds of surgery:

●Robotic hysterectomy – In a variation of the laparoscopic approach, the tools used for the surgery are attached to a robot that the doctor controls. This is called “robot-assisted laparoscopy.”

Why might a woman need a hysterectomy? — A hysterectomy might be done to treat and of the following:

●Abnormal bleeding – Some women bleed too much during their period or at times when they should not be bleeding. This can lead to a condition called anemia, which can make you feel very tired.

●Fibroids – Fibroids are tough round balls of muscle that form in the uterus. They can get very big and press on the organs inside the belly. They can also cause abnormal bleeding.

●Cancer or conditions that could lead to cancer – Cancer can affect the uterus or the cervix, the organ that separates the uterus and the vagina. Sometimes doctors suggest removing these organs if they show signs that cancer is about to form.

●Ongoing pelvic pain – Some women feel pain that will not go away in the area just below the belly. This is called “chronic pelvic pain.” Hysterectomy can sometimes help cure this pain.

What if I do not want a hysterectomy as an option? — Many of the conditions that are treated with hysterectomy can be treated in other ways instead. If you do not want the surgery, ask your doctor or nurse if you have other treatment options. Ask, too, what will happen if you do NOT have a hysterectomy.

●Ovaries and fallopian tubes – The ovaries are the organs that make eggs (which can become a baby) and female hormones, including estrogen and progesterone. The fallopian tubes carry eggs from the ovary to the uterus. The hormones made by the ovary help keep bones healthy and are important for other aspects of health. Women who have their ovaries removed sometimes need to take hormone pills.

Should I have my ovaries and tubes removed if I have a hysterectomy? — Deciding whether or not to have your ovaries removed can be tough. You will need to think about how old you are, and about how not having ovaries might affect you.

In women who have not been through menopause, having the ovaries removed can lead to hot flashes, bone loss, reduced interest in sex, and other problems. In women who have been through menopause, having the ovaries removed might also increase the risk of health problems, such as heart disease, but the research is still not clear. On the other hand, women who have health problems that get worse at certain times in the menstrual cycle sometimes feel better without their ovaries. Plus, in rare cases, the ovaries can develop cancer, so women sometimes choose to have them removed. Before you have surgery, ask your doctor about the pros and cons of having your ovaries removed.

The fallopian tubes are not needed if a woman does not plan on becoming pregnant. In rare cases, the tubes can develop cancer.

What will my life be like? — Studies show that women can have happy, full lives after a hysterectomy. Many women feel better after the surgery, because they no longer have the symptoms that bothered them before.