Skip to content
Strike a Pose: The structure of our proteins informs how we function 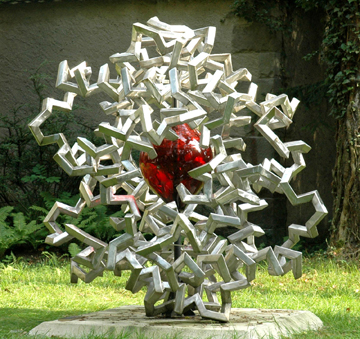 Then your car breaks down. No cell phone signal, no service stations in sight. You stand on the shoulder of the road and stare at your vehicle. How can you figure out what’s wrong if you don’t know how it worked in the first place?

If you’ve never watched an engine while it is running smoothly, you’ll have trouble figuring out that the drive belt is important and shouldn’t be torn. If you don’t know that gas tanks hold fuel, you won’t consider a hole in the tank to be a problem.

Mechanics know that fixing and maintaining cars requires understanding how the parts function—which goes hand in hand with understanding their structures.

The same is true of our bodies. The proteins that keep us running have specific shapes that allow them to do their jobs. When a protein’s cap falls off or its “ignition key” gets bent, healthy processes break down.

Researchers can pop the hood on human biology to learn “the nuts and bolts of all the parts and how they go together,” says Michael Eck, an HMS professor of biological chemistry and molecular pharmacology at the Dana-Farber Cancer Institute.

Doing so gives scientists and doctors vital clues about what goes wrong in disease—and how those wrongs might be corrected. 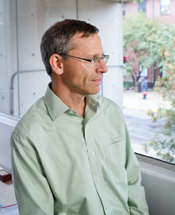 Stephen Blacklow
John Soares, photographerThe corkscrews, woven sheets, hairpin curves, and other twists of the amino acids that make up proteins can be beautiful. So can proteins’ larger-scale shapes, like the sevenfold symmetry of GroES/GroEL, a molecular chaperone in bacteria that, among other duties, helps proteins fold. It’s a favorite of Blacklow’s. Another favorite is the coiled coil, which contains as many as seven helical strands wrapped around one another.

“It’s so simple, yet one of the more beautiful structures in biology. You can parameterize it mathematically,” he says. “It’s that perfect.”

Since the first protein structures were determined in the 1950s, scientists and artists alike have sought to render them in ways that range from the meticulously reconstructed to the whimsically abstract. A potassium channel becomes a shower of sculpted copper curls. A crystalline form inspires a textile pattern. Researchers who have “solved” structures often decorate their offices with 3-D prints, watercolors, or laser-etched glass cubes that portray a protein’s coils and bends.

To these researchers, the aesthetics of the structures can be appreciated together with their function.

“Whether it’s an automobile engine, a fork, or a protein, function is conferred in large part by structure,” says Eck.

Just look at keratins. These spiral-shaped proteins coil around one another to form rope-like bundles that give skin, hair, and nails their strength.

Or consider antibodies. Their “Y” shapes allow them to trap invaders with the tips of their arms and to broadcast alarms with their stems.

When scientists investigated how cells receive messages, they learned that receptors on cell surfaces evolved to form specific shapes that interlock with matching message-bearing

chemicals. When researchers examined how DNA is copied, they found that the molecule that reads it has a doughnut shape that allows it to slide along the single-helix strand, letter by letter.

“Visualizing biological machines in detail allows you to formulate a depth of understanding that wouldn’t be possible otherwise,” says Blacklow. 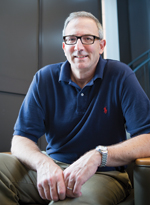 Michael Eck
John Soares, photographerMany diseases develop as a result of genetic mutations that change the shape of a protein. Normal hemoglobin is a ring of proteins surrounding an iron molecule that binds and releases oxygen. Sickle cell disease arises because a mutation in one of those proteins can collapse the deoxygenated hemoglobin, forming a rod. The result of that single deformity—red blood cells that stick within capillaries and break down prematurely—causes pain and tissue damage and can lead to anemia.

Uncovering the role structural changes play in a given disease helps researchers devise treatment strategies. Knowing how a protein has mutated allows drug researchers to target the delivery of treatments; discovering that subsets of patients with the same disease have differently misshapen proteins allows treatments to be personalized. Similarly, understanding how a mutant protein deviates from the normal form provides insight into how scientists might improve a drug’s specificity.

“There’s almost a scientific mandate to acquire this understanding to intervene in disease,” says Blacklow. “Without it, you’re shooting in the dark.”

What’s more, Eck wants to design drugs that block only the mutant receptor. Being able to shut down that version in cancerous tissue opens the way for normal EGFR to keep doing its job in other tissues, including the skin and gastrointestinal tract.

Smile for the Camera

Eck’s own job would be easier if he could just snap a photo of normally structured EGFR and another of the receptor when it has mutated.

That option isn’t available, at least not yet. Instead, Eck, like other structural biologists in the past century, must rely on available indirect visualization methods.

Topping that list is X-ray crystallography, in which researchers painstakingly coax proteins to dissolve in solution and then to grow into tiny, perfect crystals. Once a crystal has formed, researchers can shoot X-rays through it and use the resulting diffraction pattern to compute the three-dimensional position of every atom inside.

The technique may be laborious and ill suited to fat-soluble proteins, but it’s still the one to thank for about 85 percent of what we know about characterized protein structures.

Structures of those proteins that don’t reveal themselves with this technique might be puzzled out using nuclear magnetic resonance (NMR), which requires proteins to be dissolved but not crystallized. NMR spectrographs can tell researchers a little bit about a protein’s dynamics in addition to its structure. The tool does have a limitation: it works for only small proteins.

Advances in electron microscopy now allow researchers to view large proteins atom by atom, no crystallizing required. It’s the closest thing researchers have to snapping a Polaroid of a protein.

“It’s the most exciting advance in structural biology in the past decade,” says Blacklow.

Once researchers think they’ve solved a structure, they have many ways to check whether their solution is right. If they’re concerned that crystallization changed a protein’s structure, for example, they can compare that structure to one resolved using NMR. Or they can determine whether their findings successfully predict what happens in an experiment. 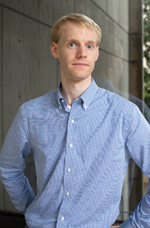 “Knowing what the object looks like tells you a lot about how it might work. It doesn’t, however, tell you how it doeswork,” says Eck. “If you saw a fork for the first time, you might guess that its tines are good for spearing things. But you wouldn’t know for sure until you’d seen them in action.”

Proteins don’t stay still. They shift from one shape to another and back again: on, off, open, closed, bound, free, and myriad less easily defined states.

“There’s a lot of motion at that scale,” says Andrew Kruse, an HMS assistant professor of biological chemistry and molecular pharmacology.

Each protein assumes a certain number of shapes that are biologically important. The difference between those shapes can be striking, like a ballerina bent in a plié compared with one leaping in a grand jeté. Or it can be subtle, like the turn of a wrist that allows her partner to take her hand.

Big or small, changes in shape affect what a protein can do, so researchers want to see it dance through all of its poses. They want to know what cues the shifts between poses, or, sometimes, how many of a particular kind of protein strike the same pose at the same time.

“We focus on how you get from one state to the next,” he says. “Structural biology is the starting point for us.”

One of Loparo’s projects involves protein complexes that repair double-strand DNA breaks. Cells have two ways of repairing such trauma: a careful, error-free way and a quick, slap-dash fix in which the broken ends get jammed back together. Loparo focuses on the latter. He draws on our knowledge of the structures of the complexes to figure out where to attach fluorescent labels to the DNA ends or to the various proteins associated with the repair machinery. Then he watches what happens—in real time.

He hopes what he witnesses will help him answer questions like how a cell “decides when to be really careful and when it can be sloppy” and why the machinery sometimes goes awry. After all, he points out, perfection isn’t always advantageous; evolution is a balance between genome preservation and instability.

When describing how proteins work, scientists tend to move their bodies. They might mime graceful helices,open cupped palms like a hinge, or mimic a piston-like motion reminiscent of milking a cow. 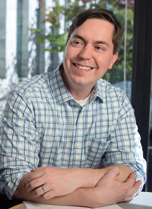 Joseph Loparo
John Soares, photographerWhen describing proteins in motion, dance becomes a convenient analogy. Eck’s students once choreographed an interpretive dance to express how a kinase and a T cell receptor fold together around a zinc atom; the zinc atom was played by a foil-wrapped basketball.

Although individual proteins may resemble elegant dancers, when you cram thousands of them into a cell, each type busting its own moves, the scene resembles more of a mosh pit on fast-forward.

“What’s going on in the cell may be closer to chaos than perfectly choreographed movement,” says Blacklow.

Performing a dance or making a digital animation may convey that protein dynamics are “really ordered,” says Loparo. “But most of what’s driving life on this scale is random collision. A lot of bumping into things. You’re being thrust about by the crowd around you.”

It’s unnerving to think that our bodies rely on chance encounters in a rowdy protein crowd. Fortunately, structure helps the right proteins find one another.

Kruse also appreciates how structure contributes to order and function. “Everything is regulated and connected in a way that sets up a balance. Two proteins may collide randomly, but if their structures are complementary, they will stick to each other. And then they can go on to do something useful.”

The better matched their structures, the more likely proteins will stick together. Still, it seems a marvel that, more often than not, all this bumping and flailing gives rise to a person’s state of health.

“How does any order come from this? That’s really what’s always been the fascination for me,” says Loparo. “These impressive protein machines are given so little to work with and are able to do these complicated tasks accurately.”

That’s the wonder of evolution, says Blacklow. “Functional demand leads the evolution of shape. The way a protein is structured may not be the only solution, or even the best solution, to an organism’s functional need. It may not be what an architect of biology would create. But it does the job. And that’s enough.”