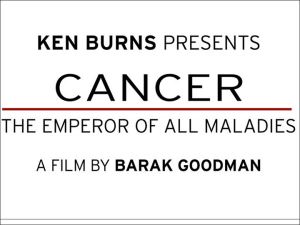 a 6-hour film examining the history of cancer.The documentary itself is based on the 2010 Pulitzer prize-winning book “The Emperor of All Maladies: A Biography of Cancer” by Siddhartha Mukherjee, MD, PhD.

The Entertainment Industry Foundation (EIF) and its SU2C initiative and WETA-TV, the Washington, D.C., PBS station, spearheaded the production and are coordinating outreach efforts.

EIF obtained the television and film rights for Mukherjee’s book soon after its publication (and prior to its Pulitzer) at the urging of the late producer Laura Ziskin, one of SU2C’s co-founders, who read the book when she was undergoing treatment for metastatic breast cancer. EIF then persuaded Burns to produce a documentary based on it.