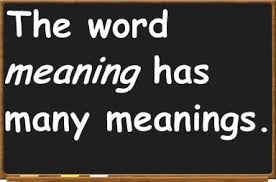 Check what Cataract, Asthma, Diagnosis, Prognosis,Sequela, Acute, Chronic, Sign or Symptom, mean or imply together with others..

My friends always agree with me on the usage and i often feel blank in speaking  normal language after almost 16 Hour long day around labs, wards, and clinics, listening to patients, answering queries and forgetting a normal language. Yes and more, food and coffee is had over discussions of blood and tumours. My attempt is to be on the same page with all out there who want to know what their doctor means and is speaking.

Though Greek in origin the word, Polysemy may have many senses to the meaning and has been described as, ” It is the capacity for a sign (such as a word, phrase, or symbol) to have multiple meanings (that is, multiple semes or sememes and thus multiple senses), usually related by contiguity of meaning within a semantic field.”

• Cataract: From the Greek term meaning “waterfall.” In healthcare lan- guage, this means progressive opacification of the lens.

• Asthma: From the Greek term meaning “panting.” Although this word origin is understandable, the definition is a respiratory disorder character- ized by recurring episodes of paroxysmal dyspnea (difficulty breathing).

• Diagnosis: The disease or condition that is named after a healthcare pro- fessional evaluates a patient’s signs, symptoms, and history. Although the term is built from word parts (dia-, meaning “through,” “complete”; and -gnosis, meaning “state of knowledge”), using these word parts to form the definition of diagnosis, which is “a state of complete knowledge,” really isn’t very helpful.

• Prognosis: Similar to diagnosis, the term prognosis can be broken down into its word parts (pro-, meaning “before” or “in front of”; and -gnosis, meaning “state of knowledge”), but this does not give the true definition of the term, which is “a prediction of the probable outcome of a disease or disorder.”

• Sequela (suh KWELL ah): A condition that results from an injury or disease.

• Acute: A term that describes an abrupt, severe onset (acu- means “sharp”) to a disease.

• Chronic: Developing slowly and lasting for a long time (chron/o means “time”). Diagnoses may be additionally described as being either acute or chronic.

• Symptom: A subjective report of a disease (pain, itching)

Now for some interesting grammar for all from Kids to elders we may want to look at:

Some words you may find in your reports or surgery summary could be such as tonsillectomy rhinoplasty splenorrhaphy colostomy osteotomy lithotripsy.

We shall cover more words and meaning in posts that follow.

Polysemy of the words that find many meanings between English Language and the Medical terminology are as under. Check for yourself on the words that you use in your daily language and compare with your words of speech (Gloss-ary):

Interesting as it gets

ante- means forward,  in  front  of

endo-, end-within like in end-scopy which means viewing from Inside.