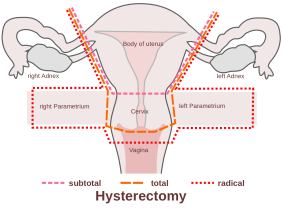 For this one must first consider the reasons to be compulsive around the ailment that warrant a hysterectomy or others that that compels one to undergo such procedure.

I feel lucky to have seen this request out hear, especially around the time when there is a news (study) and guidelines that followed to rock the gynaecology speciality lately.

Though it not directly linked to the query but is very important to note:

The USPSTF found adequate evidence that annual screening with transvaginal ultrasonography and testing for a serum tumor marker, cancer antigen (CA)–125, in women does not reduce the number of ovarian cancer deaths.

Hence, the choice and selection of patient is important while a procedure such s one in your query is to be adressed.

In summary please also read as under:

There are 4 main kinds of surgery:

●Robotic hysterectomy – In a variation of the laparoscopic approach, the tools used for the surgery are attached to a robot that the doctor controls. This is called “robot-assisted laparoscopy.”

Now for the most important part: Who may need it?

For all godly reasons and medical endeavours, hysterectomy might be done to treat and of the following:

●Abnormal bleeding – Some women bleed too much during their period or at times when they should not be bleeding. This can lead to a condition called anemia, which can make you feel very tired.

●Fibroids – Fibroids are tough balls of muscle that form in the uterus. They can get very big and press on the organs inside the belly. They can also cause abnormal bleeding.

●Cancer or conditions that could lead to cancer – Cancer can affect the uterus or the cervix, the organ that separates the uterus and the vagina. Sometimes doctors suggest removing these organs if they show signs that cancer is about to form.

●Ongoing pelvic pain – Some women feel pain that will not go away in the area just below the belly. This is called “chronic pelvic pain.” Hysterectomy can sometimes help cure this pain.

Wish it helps. Please share extensively with all women and discuss with doctors at all levels of clinical setting, if you happen to be one.