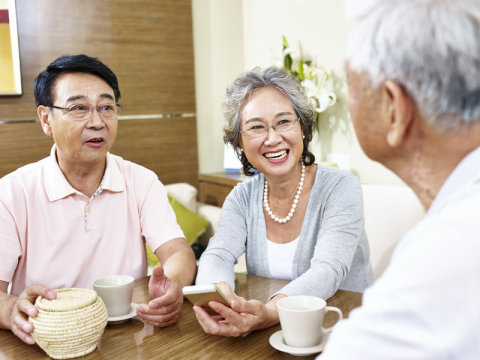 In a new study, researchers have found that increase in happiness is directly proportional with a reduction in mortality. The study, which focused on Singaporeans aged 60 years and older, found that even small increments in happiness may be beneficial, suggesting individual activities as well as government policies and programs that maintain or improve psychological well-being may contribute to longer life.

Happiness was assessed by asking the survey participants how often in the past week they experienced the following: ‘I felt happy’, ‘I enjoyed life’ and ‘I felt hope about the future’. Their responses were considered in two distinct ways; a ‘happiness score’, and a ‘binary happiness variable — Happy/Unhappy’. A wide range of demographics, lifestyle choices, health and social factors were accounted for in the analysis.

The researchers found that among happy older people, 15% passed away until 31 December 2015. In contrast, the corresponding proportion was higher, at 20%, among unhappy older people. Every increase of one point on the happiness score lowered the chance of dying due to any cause among participants by an additional nine percent. The likelihood of dying due to any cause was 19 percent lower for happy older people. Further, the inverse association of happiness with mortality was consistently present among men and women, and among the young-old (aged 60-79 years) and the old-old (aged 75 years or older).

This is one of the few Asian studies to have assessed the association between happiness and mortality among older people, while accounting for several social factors, such as loneliness and social network, therefore extending the generalisability of the findings to non-Western populations.

Materials provided by Duke-NUS Medical School. Note: Content may be edited for style and length.