Potatoes rank near the bottom of healthful vegetables and lack the compounds and nutrients found in green leafy vegetables, he said. If you take a potato, remove its skin (where at least some nutrients are found), cut it, deep fry the pieces in oil and top it all off with salt, cheese, chili or gravy, that starch bomb can be turned into a weapon of dietary destruction.

A study last year in The American Journal of Clinical Nutrition noted that potatoes have a high glycemic index, which has been linked to an increased risk of obesity, diabetes and cardiovascular disease.

The study found that, controlling for other risk factors, participants who ate fried potatoes two to three times a week were at a higher risk of mortality compared with those who ate unfried potatoes. 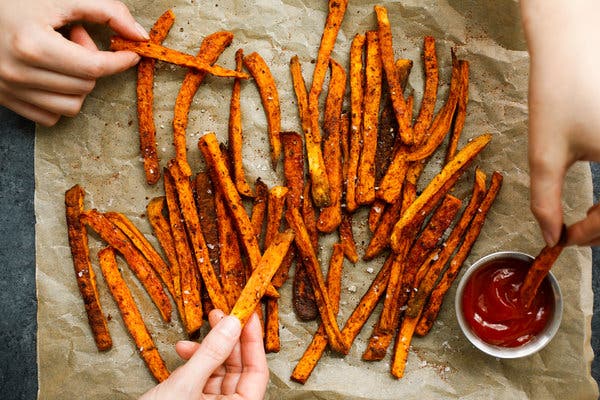 Dr. Nicola Veronese, of Padua, Italy, who was one of the study’s authors, said he and his colleagues were surprised at the amount of French fries Americans consumed compared with the amount consumed by people in other countries.

In the United States, potatoes are the most consumed vegetable, with Americans eating an average of 115.6 pounds of white potatoes a year, of which two-thirds are in the form of French fries, potato chips and other frozen or processed potato products, according to Agriculture Department statistics.

Of Americans’ appetite for fries, Dr. Rimm said, “It’s too bad in this country you’ll pry them from my cold dead hand.”

But fries, with their appealing “mouth feel” of warmed salt and fat, are undeniably tasty. Going fries-free seems like a lot to ask. So if you do indulge, here are some better ways to do it.