In all reality, most people would have great difficulty never eating any of the foods listed below. In fact, the US Department of Agriculture recommends that people eat a variety of foods but doesn’t proscribe any specific type. Nevertheless, certain unhealthy foods should usually be avoided and eaten only occasionally. Here is a list of six foods to eschew (pun intended) because they’re extra bad for you—bad for your health, rotten for your teeth, and terrible for your waistline. Physicians can use this information to guide not only their patients’ diets but also their own. Source 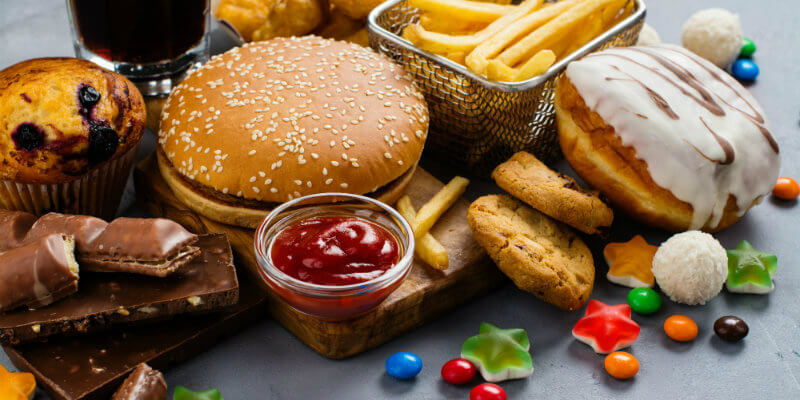 Avoid these terrible, horrible, no good, very bad foods (except on special occasions).

The copious consumption of sugary drinks heightens weight gain and type 2 diabetes risk. In fact, a kid’s chances of obesity increase by 60% for each additional sugary beverage guzzled per day. Furthermore, children who drink sugar-sweetened drinks exhibit double the rate of cavities. Of interest, in numerical terms, the annual health-care cost of obesity in the United States is $147 billion, which is a little less than the entire GDP of Hungary.

You know that French fries contain a lot of fat, calories, and salt. But do you know that they also contain acrylamide? Acrylamide is usually found in plant-based foods that are fried, roasted, or baked, including French fries, potato chips, coffee, toast, cookies, and cereal. It is a chemical formed during cooking when sugar (found in potatoes and other starches) combines with the amino acid asparagine (found in oil). Acrylamide is added to grout, cement, and paper products. It’s also found in cigarette smoke. Its consumption has been linked to cancer in animal models, albeit at much higher levels than those found in human food.

Longer periods of cooking tend to result in higher levels of acrylamide buildup. The crispier your fries or the browner your toast, for instance, the higher levels of acrylamide. The method of cooking makes a difference, with boiled and microwaved potatoes demonstrating much lower levels than frying. Although the FDA has yet to issue a formal recommendation regarding acrylamide pending further research, it does give guidance on how to decrease exposure.

Whole grains consist of the entire grain: bran, germ and endosperm. With refined grains, the bran and germ have been artificially removed during milling. Refined grains—used in white bread, white rice, pasta, and cereals—have a finer texture and last longer on the shelf, but they lack key nutrients including B vitamins, iron, and dietary fiber. Although B vitamins and fiber can be placed back into refined-grain products, fiber isn’t usually added, thus it’s a good idea to prefer whole-grain counterparts like whole-wheat bread and brown rice. Fiber decreases the risk of heart disease, stroke, and type 2 diabetes.

A common misconception is that only whole-grain foods are brown. In fact, molasses or other ingredients can be added to bread made of refined flour to make it brown. Instead, when searching for whole grain bread in the bread aisle, look at the ingredient list, with the words “whole grain” or “grain” listed first.

Processed meats are preserved via smoking, salting, curing, or by adding other preservatives, and have been linked to cancer. Any amount of processed meat that is a regular part of the diet predicts both stomach and colorectal cancers. Processed meats can heighten cancer risk in various ways, including the build-up of carcinogens in the body. The American Institute of Cancer Research (AICR) recommends that people eat processed meats only occasionally. On a related note, processed cheese is bad for you, too.

According to AICR’s current research, eating more than 18 ounces of red meat per week increases colorectal cancer risk. The mechanism by which red meat leads to cancer, however, has yet to be fully understood. Yet researchers have shown that red meat does contain compounds that harm the gut and can promote cancer. Examples of red meat include beef, lamb, and pork. (In a blatant example of false advertising, for nearly 20 years, pork was hailed as “the other white meat.”) The AICR recommends eating only small portions of red meat and taking a break from red meat altogether on some days.

Candy is high in sugar and calories, and excess sugar intake is linked to obesity, heart disease and, of course, tooth decay. Many types of candy are also high in fat. Candy contains no nutrients at all. It should be saved for a treat on special occasions like Halloween.